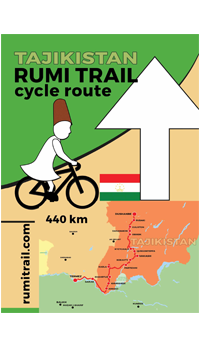 Get your cycling-guidebook
?
Home 9 Cycling Tajikistan

Jayhun District (Russian: Район Джайхун; Tajik: Ноҳияи Ҷайҳун, before 2016: Qumsangir District) is a district in Khatlon Region, Tajikistan. Its capital is the town Dusti. The population of the district is 139,000 (January 2020 estimate).

During part of the Soviet period, the district was named Molotovobod District.

Khatlon Region (Tajik: Вилояти Хатлон, Viloyati Xatlon), one of the four provinces of Tajikistan (Tajik: вилоят, Viloyat) is the most populous of the four first level administrative regions. It is situated in the southwest of the country, between the Hisor (Gissar) Range in the north and the river Panj in the south and borders on Afghanistan in the southeast and on Uzbekistan in the west. During Soviet times, Khatlon was divided into Kurgan-Tyube (Qurghonteppa) Oblast (Western Khatlon) – with the Kofarnihon and Vakhsh river valleys – and Kulob Oblast (Eastern Khatlon) – with the Kyzylsu and Yakhsu river valleys. Both regions were merged in November 1992 into today’s Khatlon Region (or viloyat/oblast). The capital city is Bokhtar, formerly known as Qurghonteppa and Kurgan-Tyube.

Dusti District (Russian: Район Дусти; Tajik: Ноҳияи Дӯстӣ, before 2016: Jilikul District) is a district in Khatlon Region, Tajikistan. Its capital is the village Jilikul. The population of the district is 117,100 (January 2020 estimate).

Jaloliddin Balkhi District (Russian: Джалолиддин Балхи; Tajik: Ноҳияи Ҷалолиддин Балхӣ, 2007-2016 Rumi District, before 2007 Kolkhozobod District, in 1933 Vakhsh district, 1934 — 1957 Kaganovichabad, before 1933 Tughalang and Halovard), is a district in Khatlon Region, Tajikistan, located south of the regional capital Kurgan-Tyube (Qurghonteppa) and Vakhsh District. It was renamed Rumi District on 23 June 2007 in commemoration of the 800th anniversary of the Persian poet and philosopher Rumi and plans were announced to erect a monument to Rumi in the district. It was renamed again in 2016 to Jaloliddin Balkhi, another name for the poet Rumi.

The population of Jaloliddin Balkhi District is 201,300 (January 2020 estimate). The district capital is Balkh (former name: Kolkhozobod). The district has an area of about 900 km2.

Mazar-i Sharif has an international airport.

Kabul Airport has better connections to the world than other cities and is therefore also used frequently by Rumi Trail travellers.

Busses and trains connect all cities on the route on a frequent basis, travel time depends on your start point.

You can also fly to Tashkent and take high-speed train connections to Samarkand and take a bus to Termez.

Connection from Tajikistan. Fly to Dushanbe and cycle via Vakash to Termez.

Afghanistan is a country in Central Asia.

The currency in Afghanistan is Afghan afghani. Credit cards and bank cards are rearly accepted. There are a few ATM’s so cash is mostly used.

The official language are Pashtu and Dari,  and English and Uzbek are the languages of international communication.

There are no updates yet. First guidebook will be published around September/October 2022